The Muzhievo Project is the most developed property in the Beregovo District and previous work established C1+C2 reserves that are recorded in the State Balance for Ukraine.

The Muzhievo property consists of mineral license number 5495, covering 151.2 hectares, issued on March 19, 2012 and is valid until March 19, 2032 (figure 3). This license authorizes subsurface mining for gold and polymetallic ores as well as groundwater that would be suitable for the requirements of an eventual mine and metallurgical infrastructure. 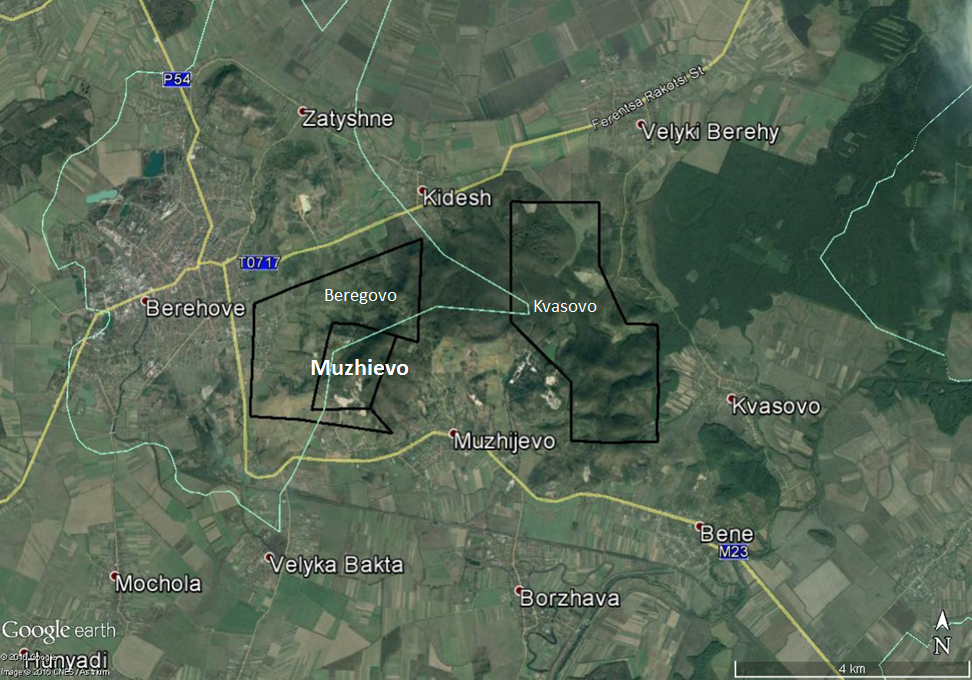 The Beregovo Mineral District is comprised of 3 mineral licenses covering the Muzhievo deposit, the Beregovo deposit, and the Kvasovo mineralized field, respectively.

The geology of the Muzhievo Property is defined volcanism and sedimentation associated with a major volcanic caldera structure. The Muzhievo Property along with the adjacent Beregovo Property, which are part of the same system, sit on the eastern rim of the caldera and gold and polymetallic mineralization are best developed at the intersection of the rim faults and cross cutting east and northeast structures. Veins range from east-west to northeast-southwest in orientation with dips generally to the north and northwest at 70 to 80 degrees and vary from 0.6 to 8.4 metres in thickness. The veins extend from surface down to at least 300 metres on Muzhievo and about 400 metres depth on Beregovo (Besserer, 2008).

The style of deposit found in the Beregovo Mining District is typical of intermediate sulphidation epithermal systems. Gold and base metals are zoned in the system with gold-only veins in the top portion of the deposit and polymetallic mineralization at depth. Mineralization occurs as veins, vuggy breccias and as sulphide replacement from pods and massive lenses associated with high-level epithermal environments marked by acid-leached, advanced argillic and siliceous alteration (Kotlyar and Ludington, 1996).

During the 1970’s a major exploration program was undertaken by the Ukrainian government on the property. More than 2,000 drill holes were collared and over 30km of underground workings were developed on 6 levels into the late 80’s which lead to the definition of C1+C2 “reserves” based on drilling and underground workings that were approved by the USSR GKZ in 1990 (State Commission for Reserves of Natural Resources of the USSR in 1990; Protocol No.2409-кdated March 29, 1990). These resources are presented in table 1 and total 17.8 million tonnes at 2.13 gpt Au, 37.5 gpt Ag, 2,16% Pb and 4.41% Zn for a total of 1.22 million ounces of gold plus by-products. Note that these are historical estimates and have not been classified by a Qualified Person as current mineral resources or mineral reserves; refer to the Disclaimer page for more details. The reserves shown in table 1 are on the Ukraine national register of reserves as of 1st of January, 2013.

Table 1: State Balance Reserves, USSR GKZ, 1990. Reserves on Ukraine national register of reserves as of January 1, 2013. These reserves are not JORC or NI43-101 Compliant and reader should refer to the Disclaimer page for details.

Several resource estimates were undertaken on the property since Ukraine’s independence in the early 1990’s. Results varied based on the assumptions that were used but all were essentially consistent.

In 2013 RJC Consulting of Moscow, undertook a mineral resource estimate using existing data and arrived at the numbers in Table 2. The company provided separate estimates for precious and base metals which range between 17.0 and 17.8 million tonnes of ore at average grades of 2.13 gpt Au, 37.5 gpt Ag, 4.41% Zn and 2.16% Pb. In addition the company estimated an additional 2.2 million tonnes of P1 category resource at a grade of 8.36 gpt Au. 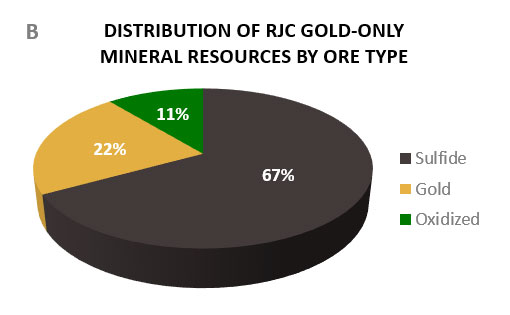 Figure 4: Distribution of RJC-estimated mineral resources on Muzhievo Property by A) all ore types and B) for gold-only ores.

RJC in 2013 proposed that mined gold and polymetallic ores could be processed by a combination of gravity and floatation processing flow sheets with estimates of recoveries shown in Table 3.

Table 3: Precious and base metal recoveries estimated by RJC (2013). 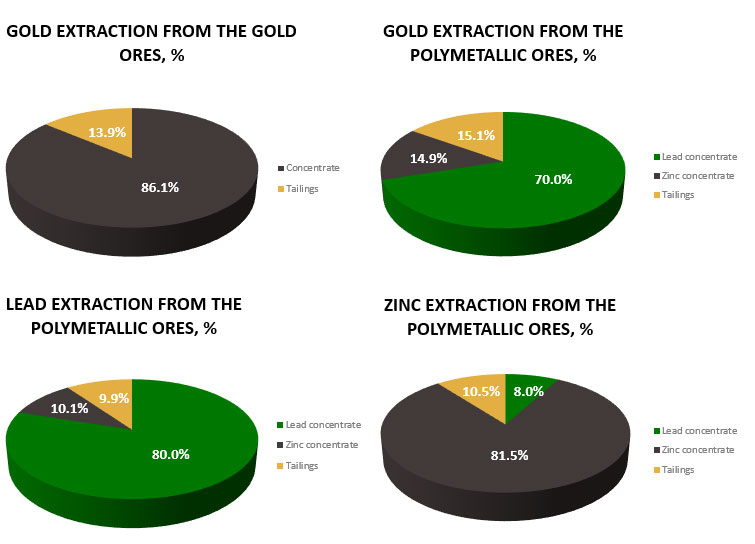 Figure 5: RJC 2013 estimates of metallurgical recoveries for gold and base metals from Muzhievo deposit. .

Some tailings are present in the vicinity of the Muzhievo Property (figure 6) and RJC (2013) estimated that some gold could be extracted from them based on the sampling shown in figure 7). 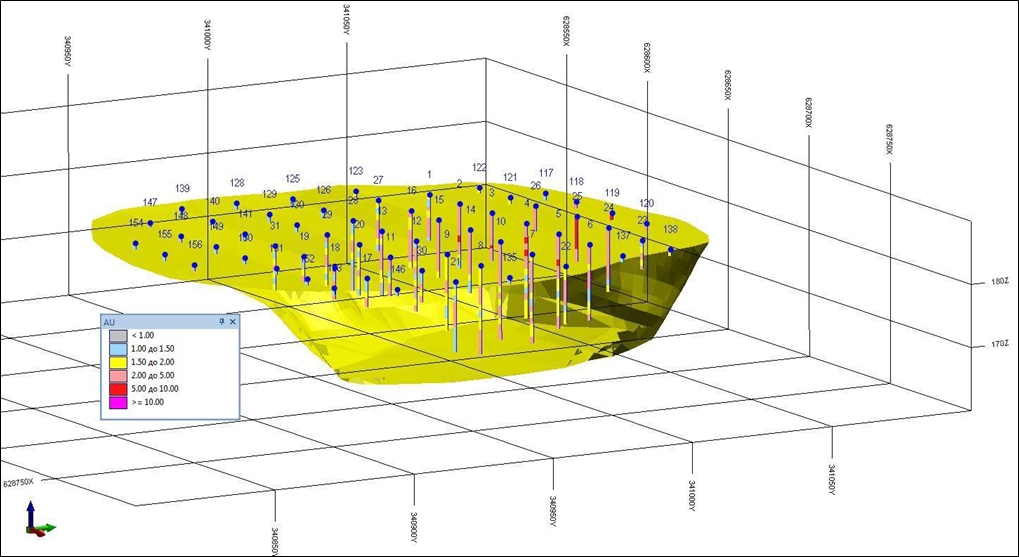 RJC estimates the tailings contain approximately 257,100 tonnes at a grade of 2.22 gpt Au for a total of over 18,000 ounces of in situ gold (table 4). No information was provided as to recoverability of the gold nor has any financial estimate been done to evaluate the exploitation of the tailings.

RJC 2013 provide estimates of the economic performance of the Muzhievo project in table 4. According to this study, based on a production of 100,000 tonnes of gold-rich ore and 500,000 tonnes of gold-polymetallic ores over a 17 year mine life, the project has a net present value of US$ 84.7 million and generates an internal rate of return of 40% at a 15% discount rate.