RPT-COLUMN-Zinc on a bullish tear but just how high can it go?: Andy Home 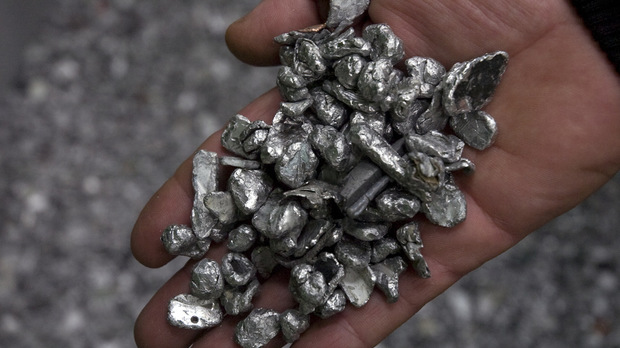 (Repeats with no changes. The opinions expressed here are those of the author, a columnist for Reuters) * LME zinc call options: tmsnrt.rs/2fYeZft By Andy Home LONDON, Aug 21 (Reuters) - Zinc on Monday morning hit a fresh decade high of $3,180.50 per tonne on the London Metal Exchange (LME). Zinc bulls have been waiting a long, long time for this moment. A slow-fuse narrative of a looming supply crunch has been simmering for years but has finally burst into explosive price action. True, London zinc has been given a helping hand from Shanghai, where speculative froth seems to have spilled over from the iron ore and steel markets to the base metals complex. And also true, a supply-side response to high zinc prices is already starting to build with old mines such as Thalanga in Australia being brought back out of mothballs and speculation mounting as to how long Swiss producer and trader Glencore will wait before reversing the production cuts it announced in 2015. But right now the LME zinc market is bubbling away with stocks falling and spreads tightening. Volatility seems assured but can zinc return to the heady days of late 2006/early 2007, when the price peaked out at $4,580? There are a few believers, judging by some of the higher strikes trading in the zinc options market but the overall options landscape suggests collective bull positioning is much less ambitious. LME STOCKS DOWN, SPREADS TIGHTEN The zinc raw materials market has been tightening for many months thanks to the closure of exhausted mines such as Century in Australia and Glencore's 500,000 tonnes of annualised cutbacks. But until very recently any flow-through impact on the refined metal part of the zinc supply chain has been elusive. That's changed, at least as far as LME-registered stocks are concerned. At 247,850 tonnes, headline LME zinc inventory has fallen by 180,000 tonnes, or just over 40 percent, so far this year. It is back at levels last seen in 2008. On-warrant stocks are significantly lower still at 125,525 tonnes after someone last week cancelled a 23,050 tonne tranche at New Orleans in preparation for physical load-out. Since this is the ultimate physical liquidity base of the London contract, it's no big surprise to see time-spreads start to tighten up. The benchmark cash-to-three-months period CMZN0-3 ended last week valued at $7.00 per tonne contango, compared with $15.50 contango on Monday. There is a pocket of more acute tightness on the LME's prime September prompt date (Sept. 20) with the spread between then and October trading in small backwardation. Although there are no warning lights yet flashing on the very front part of the curve, stocks have reached a level where more spread volatility seems assured. Graphic on LME zinc call options: tmsnrt.rs/2fYeZft OPTIONS LANDSCAPE But what of the outright price? LME three-month zinc is already up by almost 25 percent so far this year. Can it go higher, even back to those super-charged levels seen 10 or so years ago? The LME options landscape suggests there are a few super bulls looking for more stellar upside price action but the bulk of positioning betrays much more modest expectations. Market open interest is broadly bullish, skewed towards calls, which confer the right to buy, over puts, which confer the right to sell. As of Friday's figures from the LME, call open interest across all active months totalled 64,055 lots, compared with 38,845 lots of puts. And some of it is sitting on strike prices as high as $4,500 (September) and $4,400 (December). But the tonnages are relatively modest at 2,500 tonnes and 8,575 tonnes respectively. Rather, most of the call open interest across the front four months (September-December 2017) is distributed across a strike price spectrum running from $3,000 to $3,500 per tonne. A significant part of that, clustered on the $3,000 and $3,100 strikes, has already moved into the money after zinc's burst higher last week. It may, indeed, have acted as an accelerator to the move as those who sold those options would have had to cover their exposure. The balance of the rest of the call open interest is sitting on the $3,200 strike price (9,946 lots through December), the $3,400 strike (4,620 lots) and the $3,500 strike (7,585 lots). Open interest then tails off sharply in the more rarefied atmosphere above that strike price level. And beyond the end of December, things look even more subdued. The highest call strike in June 2018, the month with the largest options interest next year, is just $3,650. BULL RESTRAINTS Upside positioning in the zinc options market suggests that the current consensus is for only a bit more upside and earlier rather than later. There are two major restraints on bullish expectations. The first is that building supply response, which could be significantly accelerated if Glencore pulls the trigger on reactivating some of its shuttered capacity. The second appears to be continued scepticism about the signalling power of LME stocks. LME stocks are already low and with almost half sitting in the cancelled category awaiting load-out, they look set to fall further. But how much zinc is sitting in the statistical off-exchange shadows? There is still little hard evidence of a metal squeeze outside of the LME. "The availability of zinc metal for rapid delivery continued to be good in Europe and spot market metal premiums remain largely unchanged," was Swedish producer Boliden's take on the physical market in its Q2 2017 financial report. The possibility of metal finding its way into, or even back into, LME sheds, particularly in the event of a cash-date squeeze, seems to playing on bulls' minds. Because for now, the zinc options market is signalling there is a bit more bullish excitement to come, but only a bit and only in a relatively short timeframe. You'll know that's changed, if someone starts buying call options that target those 2006-2007 all-time highs.
The post appeared first here
Back to all news